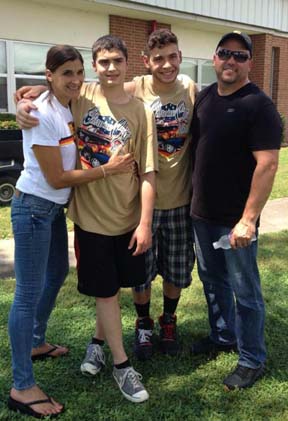 WHEN WILL I RECOGNIZE MY CHILD IN AUTISM MEDIA? 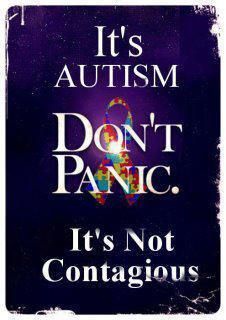 Thanks to Cindy Burroughs

I’ve stopped watching social media videos and posts that have the word autism in it. When a news program spins a teaser before the commercial break announcing the latest must see amazing autism moment, I no longer wait with bated breath through the commercial break to see what ASD cutie-pie is singing the National Anthem now or making the game winning basket in a public high school game. I don’t watch anymore because what I see looks nothing like the autism my son has. I absolutely cannot relate to their stories, however I do have a son with autism. I find myself curious if this is how minority groups have felt for years watching TV programs lacking people of color or ethnic diversity. I am now a full believer that what we are exposed to on TV and in media is the color-faded, safe version of what white middle class America is comfortable seeing.

Perhaps I should be grateful there is some inclusion into main stream with regard to autism and take what I can get. But, no. I’m not grateful to have the type of profound autism my son has be excluded from mass media because the general audience might not get it or it may be too hard to watch. Is it any less hard to watch than survive? A new PBS series called Mack & Moxy is being applauded for raising awareness and acceptance for autism in young audiences. The mission of the show is to focus each episode on a specific cause from autism, to hunger to fire emergencies. Sesame Street ( click link to see video) also introduces its audience to autism. I watched with my eyes full of tears and jealousy over what I saw. This autism looks nothing like the autism my family knows. This autism looks kind, soft, do-able. When Julia (a cartoon character with autism) is introduced to friends by Elmo on the playground Elmo suggests they “ask questions again, using less words and speak slower. Then give Julia a chance to reply.” That is great advice for a child on the spectrum with conversational skills, social skills and receptive language. My son at age 17 may not be that understood by Elmo.

I want to see two things. First, I want to see a cartoon that shows a grown person, teenage or older, with autism, having a sensory meltdown on aisle 4 of the local Target. I want to see in that cartoon the autistic individual body slam themselves into the shelf of legos and scream while holding his head a rocking back and forth followed by jumping up and down. I want to see the mom or care-giver help the individual who has no language through this. I want to see a cartoon mention the merits of cannabis and parents of children suffering with epilepsy take a family trip to the local dispensary!  I want to see it not because I enjoy chaos or want sympathy, but because it is the reality for so many families that is never addressed. My point is, if pre-school kids need to learn to accept a peer that is slightly different from them through lessons on PBS what the hell are the parents not teaching them at home and by example? Shouldn’t we be teaching them acceptance for the peers that are very different from them? Even in the late 1990’s I never faced discrimination against my son, Jason, while he was young, cute and in public. The nonacceptance, the unawareness and the cruel stares began once he was older, bigger and louder. The discrimination came from both adults and their children. It is these same Sesame Street watching children AND their parents that stare at us now and don’t seem to have a clue how to be kind, helpful and at the very least non-judgmental. Public television, I beg you, make a show about this level of autism, I promise your kids can handle it if you let them. 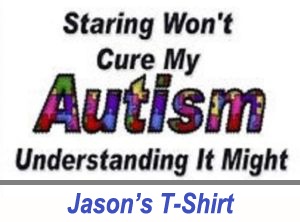 When going out in public Jason used to wear T-shirts that I prayed would explain what the unknowing were starring at. My favorite said, “My child has autism, what’s your kid’s excuse?” The shirts actually did help once the neurotypicals got past their shock and took time to read it. By then I was developing a thicker skin and felt less of a need to single-handedly educate the entire world (I felt very alone during that time.) On one trip to Target I even made a connection. Jason was tearing down the snack aisle at full speed in control of the cart as I was chasing him down. I could see he was headed straight for a gentleman in a wheel chair accompanied by an older woman I assumed was his mom helping him. They had a young girl with them, I assumed the man’s daughter and an American flag on the back of his chair. At the sound of Jason going mach-10 while jumping with a full cart in front of him, the trio before us turned in our direction. With only seconds to spare I threw my body in front of the cart shielding the veteran in the wheelchair from the power of Jason looking for Jalapeno Cheetos. At that moment I saw the soldier and read the shirt he wore as he and his mom saw Jason and read the shirt he was wearing. The veteran in the wheelchair was missing both legs, one arm and had the majority of his face and neck scarred. His shirt read: “Keep Staring, Maybe They’ll Grow Back.” Jason’s shirt that day read: “My Autism Doesn’t Hurt Me But Your Staring Does.” The mom and I look at one another, smiled slightly and nodded. We got it. We got one another. Yet we only understood because we were surviving not because Elmo taught us how but desperation and love taught us.

The second thing I’d like to see is that the label Autism is no longer an umbrella term. Enough with this spectrum crap! Once you get the diagnosis everyone seems to be entitled to the same services as everyone else. I have actually met a mother who bragged to me that her son was a little delayed and because she was the squeaky wheel she was able to get an PDD-NOS (Pervasive Developmental Delay-/Non-Otherwise Specified) diagnosis putting her son on the spectrum. At one point her son received more county services than my non-verbal child! I don’t want to take advantage of the system, I want to see reform and change. Here’s a quote from the homepage of Autism Speaks: “On March 27, 2014, the Centers for Disease Control and Prevention (CDC) released new data on the prevalence of autism in the United States. This surveillance study identified 1 in 68 children (1 in 42 boys and 1 in 189 girls) as having autism spectrum disorder (ASD).” Let’s break that down, shall we? I made the interesting key words in bold. Surveillance- meaning observed and seen- not quantitative. ASD- what does that include you ask? According to WebMD and HealthLine it includes: Aspberger’s Syndrome, Pervasive Developmental Delay/Non-Otherwise Specified, Rhett Syndrome, Childhood Disintegrative Disorders, Autistic Disorder and often ADD/ADHD are included. Well hell, no wonder 1-68 is the stat to toss around, they only left out bee-stings and the kitchen sink. I want to see these very serious, very heart-breaking disorders given their own merit, their own label, their own funding, their own attention and their own recognition. I want each one of these to have a Sesame Street special and teach us all how to accept, recognize and support the communities they are in.

This is my actual coffee mug:

Part of me does appreciate the efforts being made to further the Autism Awareness campaign but the realist in me thinks that we are all very aware of autism by now. What most are not aware of is what the different levels of autism look like, what it does to a family and what will we do with all that awareness in in the next 2 decades when these growing number of children age out of the system? Stop sugar coating this disorder! If you think you have an idea of what autism is by watching Parenthood, Mack & Moxy or Rainman than you are very misinformed.  There are a lot of things this society has a hard time stomaching and watching so we chose not to; images from the Holocaust, pictures from slavery and the Civil Rights Movement, child abuse and the list goes on. When one of these topics do get coverage it’s on a TV special or documentary with parental warnings letting the viewers know the following subject matter may be disturbing to some. Haven’t parents already educated their children and warned them that the world isn’t always pretty and ain’t always fair? Being raised under the Jewish faith I saw my first images of Nazi Germany when I was in Kindergarten. Yes, I was shocked but I wasn’t terrified or scarred for life, I was emboldened and strengthened that I must never forget. I know the same is true for Black families in our country. They don’t shield their youth from the Civil Rights Movement or the heinous history they have endured, they educate from it. As a society we are faced again with another epidemic; Autism. Do our society and our children who will become the future a real public service. Teach them the truth, the whole truth; the rocking, flapping, self-injurious, headbanging, non-verbal, wearing diapers at 19 year old truth. Teach this now when they are young so they aren’t shocked or so they don’t sweep it under the rug because it’s too hard to see and makes them feel uncomfortable later. Have more faith in the children you are raising and in yourself, I promise you Elmo can handle it.

Cindy and her family