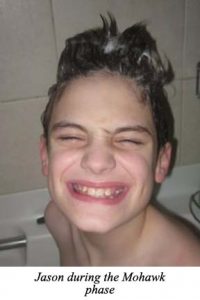 More Wisdom from a Parent

Cindy Burroughs, mother of Jason, a student at Benedictine, has a lot to offer to other parents of those with disabilities. Her article here, “The First Time My Non-Verbal Teenager Talked Back to Me,” is the next in an upcoming series. Thanks very much to Cindy for sharing her story to help others with similar challenges. Please check back for future posts. Meanwhile, you may visit her site at www.mightyinterestingandodd.com

THE FIRST TIME MY NON-VERBAL TEENAGER TALKED BACK TO ME

Not all things about having a profoundly autistic and non-verbal child are bad. For all of the hell this diagnosis has brought me there are some silver linings. I never had to hear my sons bicker in the back seat on a long car trip. Jason, my son with autism, never stole or snatched his big brother’s toys and because of Jason’s years long insistence to eating only pasta my other son saw meal time as a win. As my older son, Jay, grew older I began loosing many battles. He waged war on my ears with his music choices, he shocked my eyes with his fashion choices and he had no problem practicing the art of verbalization when it came to talking back. I accepted it as a right of passage through the teen years. On the other side I had my Jason who, according to my own belief, offered me solace while accepting all the clothes, music and no body piercing choices I made for him. Don’t get me wrong, Jason, like the majority of autistic children have VERY strong opinions and make them clear. I just happened to be lucky that Jason was never one to talk back. (Get it?) My ex-husband and I often joked when Jay was unleashing a verbal argument on us why we invested every penny we had teaching our younger son how to talk. Jason was happy to ride along in the car, licking bright orange Cheetos funk off his fingers and wiping the remains on the windows and his clothes while allowing me bop and rock to the music of my choice without him saying a word. That all ended when Jason turned 14 and he talked back to me for the first time.

I could count on Jay to respond within less than three notes into my music choice with a, “Really? Really Mom?”, as he changed the station without so much as asking. But my Jason, well he didn’t mind if I danced while driving and listened to such splendors as The Smiths and Blue October. Hell, he didn’t even seem to be embarrassed when we pulled up to a red light as I was accompanying all 3 Beastie Boys singing Brass Monkey. Jay in that scenario? He had learned years earlier how to automatically work the seat recliner the instant I took in a breath to sing avoiding the torture of being seen with me. Not my Jason, though. On really good days I could encourage Jason to move along with me, practice snapping his hands that lacked typical motor skills and share a moment that I hoped would last forever. I managed to find a silver lining. I would forever have a son that didn’t mind being seen in the car with me and let me listen to my music! And then it happened.

I was picking up Jason from School one day. He attends the most extraordinary residential school on Maryland’s eastern shore called the Benedictine School. We were both looking forward to heading home for a relaxing weekend. Although the school is almost 2 hours from our house I never minded the trip because it was a quiet time for me to think and listen to my music with my accepting co-pilot at my side. I never expected the following scenario to play out! I had made sure we were both buckled in, drinks in cup holders, Cheetos on the ready and music set to play. It was as I was taking a right off the campus. I reached out to the stereo nob, looked over to Jason and asked if he was ready to groove. He looked back at me, gave me a confident nod of the head and I turned up the sound system. I was so shocked by his response I almost crashed the car. As I took a big breath in to start my best Blondie karaoke singing, Jason reached over with his hand in my face and signed the word NO! What just happened here? Had his older brother gotten to him and coached and trained him on the nano second response to deny Mom her moment of glory in the car? When did my sure-thing of acceptance morph into a typical teenager and talk back to me?

I had too much to process at this point. Should I rejoice Jason was communicating appropriately? Wasn’t this what the last 14 years had been about? My non-verbal son successful communicated. But what did this mean? It was as if I had been handed the confirmation that I was the uncool one in car. I no longer could argue against Jay that majority ruled and I got Jason’s vote by proxy. Jason was now a full fledged teenager with an opinion and the ability to talk back. As I celebrated this monumental victory I privately hid my sorrow that now both my sons were able to talk back to me. The times they were a’changing. 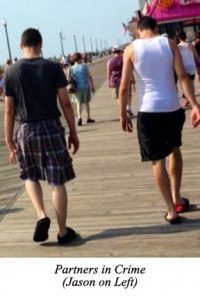 Since that day Jason has learned to assert his opinion on a regular basis. Sometimes he does so respectfully with a shake of the head or his verbalization of the word no. Other times he

let’s me know he’s not happy by a full-out tantrum, a huge shove or jumping up and down until we no longer have pictures on the walls. I had to go back in time and take an inventory on all the things I assumed Jason had agreed with me on. Take his style for example, I’m curious to know what he really thought about the Mohawk or the time I took making him look preppy to a new level. So for now I thank Jason for taking it easy on me and allowing me a few extra parental years of having my say so. I also thank him for learning, growing and finding his own voice.

Printable PDF of this article