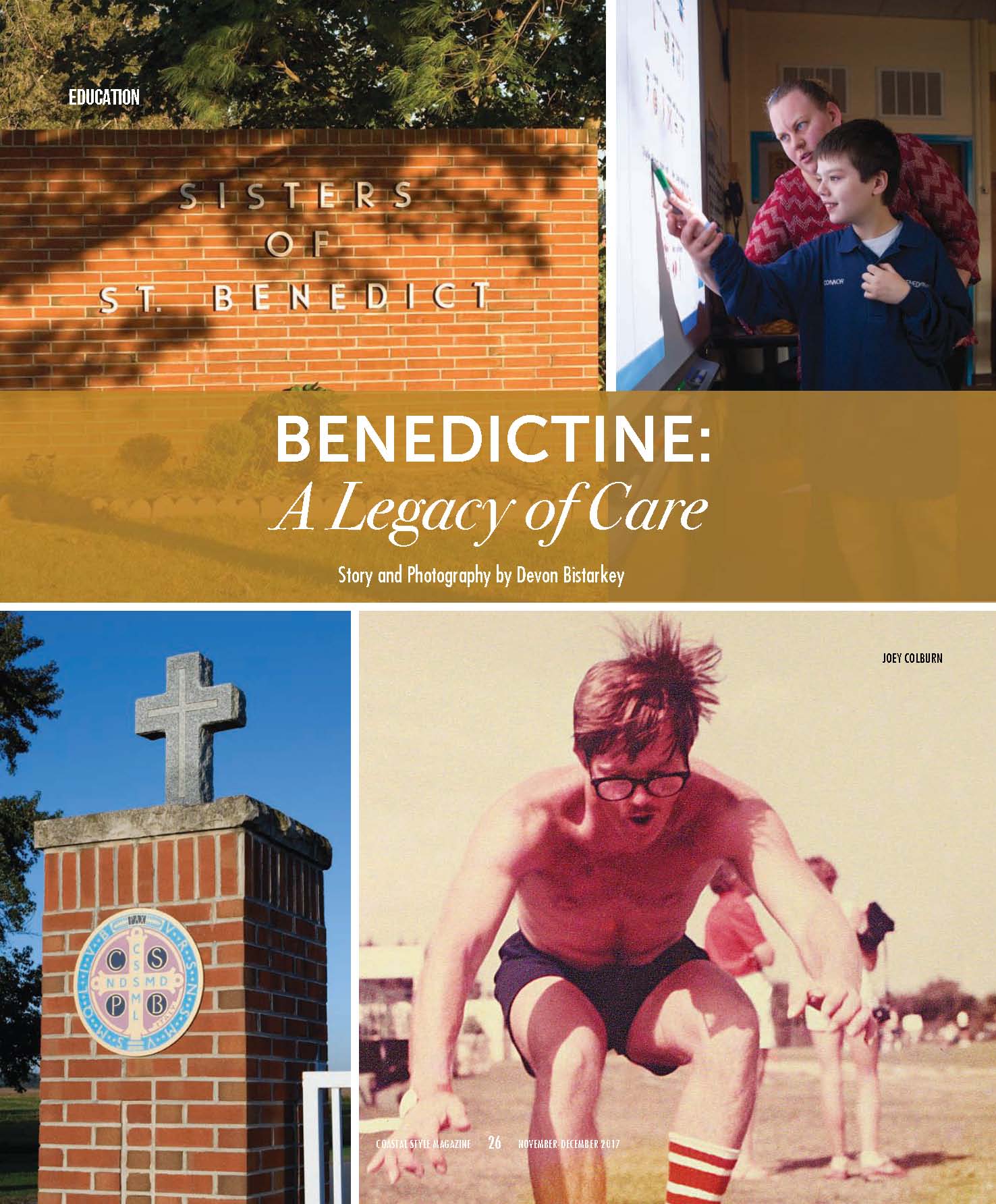 Benedictine: A legacy of Care

Benedictine: A legacy of Care

Along a winding road in Caroline County dotted with farm fields not far from Tuckahoe State Park on Maryland’s Eastern Shore, a small brick entrance reads Sisters of St. Benedict. The burgundy buttress marks the start of a long tree-lined drive – culminating in the campus of Benedictine Programs and Services.

A weathered crest of the Order of Saint Benedict still visible on its sign serves as a relic to the school’s origins; and in a small way, unintentionally perpetuates the notion that nuns in distinctive habits and veils still roam the halls.

Founded in 1887 by the Sisters of the Order of St. Benedict with the purchase of 500 acres of farmland near the town of Ridgely, Md., a monastery was built. Through the ensuing years, the Sisters, as part of their missionary service, established St. Gertrude’s, an academy for girls, on the grounds.

Evolving from the property known then as simply The Plains. However, what began to grow here wasn’t just seeds, but the buds of potential in a few flowering students.

It wasn’t until 70 years after that land purchase that the Sister’s found a new purpose in caring for, and educating, children and adults with developmental disabilities.

“The Sisters saw a need and began serving,” said Julie Hickey, Benedictine’s director of education. “This was far before it was the ‘in thing to do,’ far before any laws or regulations indicated that this was something that needed to happen.”

Then named the Benedictine School for Exceptional Children, the school began with just four boys diagnosed with Down Syndrome and the mission to help students achieve their greatest potential – a mission that is still just as important today.

One student, who joined Benedictine during its humble beginnings, was Joey Colburn, also born with Down Syndrome, in 1957 in Baltimore. At the time of his diagnosis, Joey’s father James “Jim” Colburn, was resolved to do everything in his power to make his son’s life as productive as possible.

Later, Joey and his father moved to Florida, on the medical advice at the time that a warmer climate could extend Joey’s lifespan, as individuals with Down syndrome tend to live shorter lives.

After Joey died at the age of 60 on March 4, 2017, the Benedictine Foundation became the recipient of a $3 million bequest from Jim Colburn, the largest single gift in the history of Benedictine.

According to Barry Smale, director of the Benedictine Foundation, “this bequest is significant because Jim Colburn recognized the need at Benedictine today to care for children who are much more severely disabled than his son Joey and require a higher level of assistance. Bequests of this type enable Benedictine to continue to meet the needs of its changing population. We are grateful for his foresight to plan for this gift and to make us its recipient.”

The Colburn’s generosity and affection for Benedictine, much like the Sisters, continues to leave a lasting impression here.

While the campus may best be known by the legacy of the Sisters who started their work on the rural Eastern Shore nearly 60 years ago, Benedictine today continues to transform as a modern education center for children and adults with multiple disabilities and autism.

Following the sale of the school property in 2015, a newly created independent not-for-profit organization was established. Since then, the Sisters presence here continues to be cherished. In total, 11 Sisters still call the convent on campus home and of that group, two Sisters still actively participate in the day-to-day routine, now dressed in more modern apparel.

The sale represented a milestone for what has become a legacy of care for Maryland’s, and the nation’s, differently abled.

“The Sisters made the decision to transfer the school and the property to the Board of Directors to ensure that Benedictine will, in the future, be able to continue the Sisters’ mission to provide, in the Benedictine Spirit, a quality education and opportunities for these special children and adults,” said Scott Evans, executive director of Benedictine.

Today, Benedictine, through its 450 staff, provides school- and community-based programs for 75 children and more than 100 adults. These individuals come from almost every county in Maryland as well as states throughout the Mid-Atlantic.

Now not only a school, Benedictine is a multifunctional educational center serving individuals across their lifetime with a vocational training center in Easton, Md., and 19 group homes along Maryland’s Upper Shore and Annapolis.

As a licensed nonprofit, Benedictine Programs and Services is a nationally recognized, accredited and cost-effective educational living and learning environment that includes adult services with career exploration classes, supported employment and community services, along with home-like residential living options on campus and in the community.

Building on the core values of compassionate caring, dignity of work and hospitality, set by the Sisters of St. Benedict; the work remains focused on helping those served here achieve their greatest potential.

Benedictine is, in many ways, a leader in the transformation of care for individuals with multiple disabilities, diligently working toward the goal of creating a meaningful life for all.

“Everything is about choice – what is important to the person not for the person is the focus of our person-centered plan for the individuals we support,” said Robin McDuffie, adult services project manager.

Educated staff from therapists to special educators, continue to evolve and exceed the standard of care for individuals with disabilities. As one of the largest employers on the Eastern Shore, teams of special education teachers, therapists, social workers, behavioral counselors and administrative support personnel make Benedictine a leading provider in adaptive care services.

“The school and programs have a great national reputation of providing some of the best initiatives to help people with disabilities achieve their very highest potential in a wonderfully compassionate and nurturing environment, said Smale. “The Sister’s vision of what the Benedictine community could do for children, youth and adults with intellectual disabilities continues to be far- reaching, profound and inspirational.”

A campus covered in chrome

The Benedictine campus is the unusual home to Maryland’s largest escorted classic car and motorcycle ride, the Chrome City Ride, an annual fundraising event that transforms a once functioning monastery into a chrome-covered campus.

Since the inaugural ride in 2001, the event has paved the way for more than $1 million in funds raised to support the children and adults served by Benedictine Programs and Services.

In total, nearly 10,000 participants over the years have made their way down the lane onto the Benedictine campus in Ridgely, Md.

Notable attendees in years past include Candy Clark and Bo Hopkins from the 1973 classic “American Graffiti” as well as area politicians.

The event attracts Hollywood donors as well. Car enthusiast Jay Leno, for more than five years, donated to the event as well as a collector from New Jersey who donated a 1941 Willys Pro Street Coupe in 2016. This year’s event brought the highest attendance and most donations with a total of $121,000 raised.