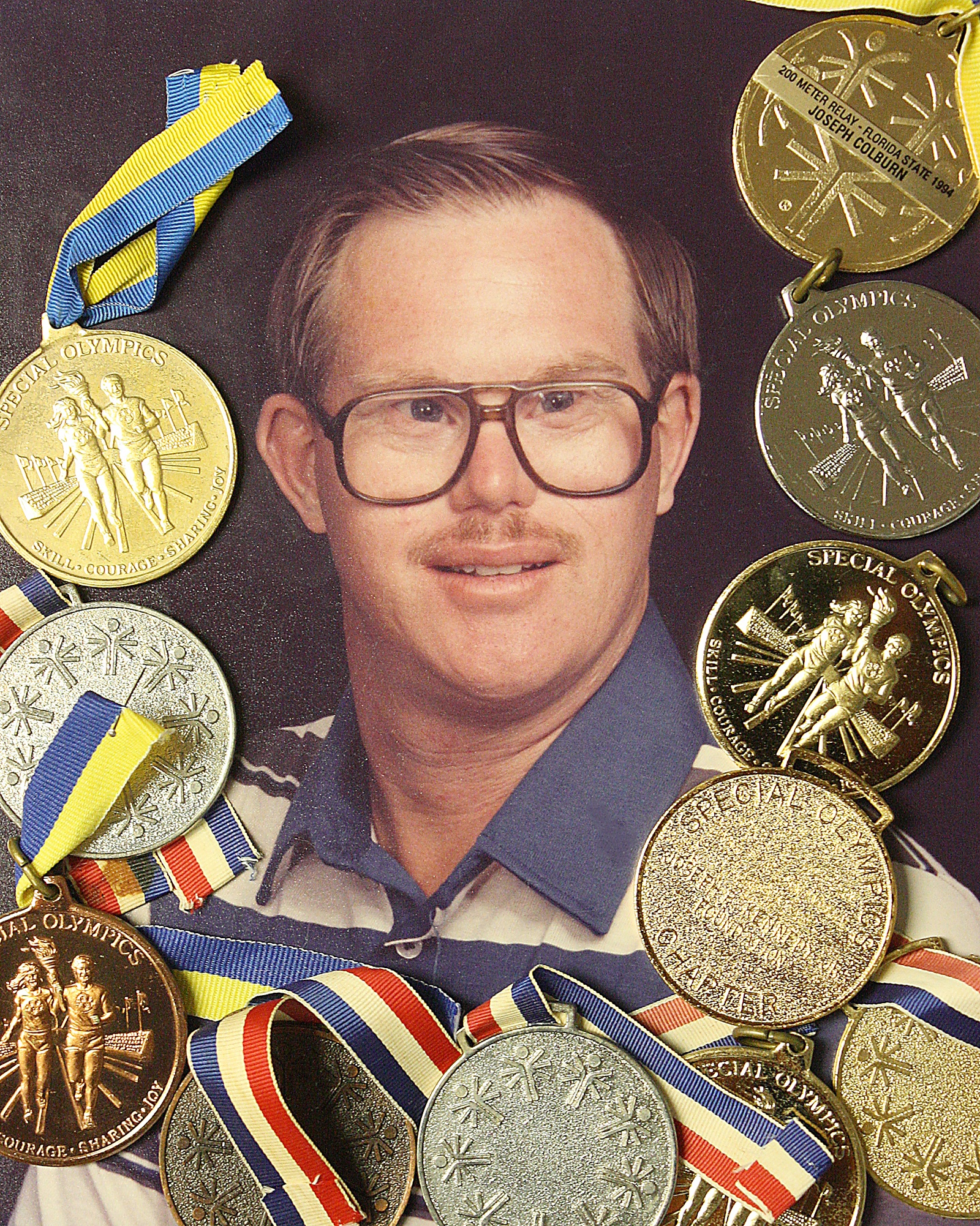 A Father’s Love … a lasting legacy

Joey Colburn, one of Benedictine’s first students, thrived in sports and life

A father’s love can go beyond what he ever fathomed he could feel for his child. This was the case for James “Jim” Colburn, whose son, Joey, was born with Down Syndrome in 1957 in Baltimore.  According to a eulogy given this year at Joey’s funeral, Joey’s diagnosis at birth was a shock and life-changing event for his father Jim, who was given the prevailing advice for the time, to put Joey in a home and go on with his life.

Instead, turning to his faith, Jim spent many hours in church praying for guidance and strength. He then called his friends with the Knights of Columbus for advice, several of whom were in similar situations with children with disabilities. When he asked them about what he could expect with a child with disabilities, they told him to expect a lot of laughter and unconditional love.

According to Barbara Doran, a close family friend, “Jim had always been a ‘take charge’ guy who could fix almost anything, but now he found himself in a situation that couldn’t be fixed. He resolved to do everything in his power to make his son’s life as productive as possible.”

Jim’s research led him to find the Benedictine School, which embraced the things he wanted for his son – for his son to learn self-sufficiency and for them to continue to be a family. Joey was five years old when he arrived at the Benedictine School from his home in Annapolis and became one of the school’s youngest residents. The school was in its infancy at the time.

Because Jim was athletic himself, later swimming in the Senior Olympics, he encouraged his son to embrace the same active lifestyle. Joey learned to swim at Benedictine and soon began setting swimming records at the school. When Benedictine hosted the Special Olympics swimming competition, Joey took part in the swimming and running competitions. He won over 100 medals and ribbons in his lifetime while competing in the Special Olympics.

Because people with Down Syndrome can have shortened life spans, when doctors said that Joey would live longer if he lived in a warmer climate, Jim, who had divorced, sold the contracting business he loved and the two moved to Florida in 1972. In 1981, because of his accomplishments in swimming, Joey was inducted as the first mentally or physically handicapped member to the International Swimming Hall of Fame.

Photographs of Joey with such celebrities as President Gerald Ford, Olympic swimming champion Mark Spitz, and Buck Dawson, the late executive director of the International Swimming Hall of Fame, tell the story of Joey’s accolades.

Jim continued to encourage Joey to be independent while living in Florida. Every day, Joey rode his bike to work three to four miles, and over a draw bridge. Jim would follow his son in his own car. Joey also learned to operate Jim’s power boat and learned to fish – a love that the two shared for many years.

Joan Normann, Joey and Jim’s friend for almost 30 years and caregiver of both since 2006, comments, “Jim wanted Joey to be as normal as he could be. He even tried to teach him to drive a car to give him that experience too. He never got his license, but the two shared a love of cars.”

According to Joan, Jim embraced what Sister Jeanette preached to all parents at Benedictine – to help their children to be all that they could be. For almost 20 years after moving to Florida, Jim and Joey visited Sister Jeanette at Benedictine every summer. When Joey was old enough, Jim helped Joey get a job to teach him responsibility and about earning money. He worked as the groundskeeper at his local church and school, St. Jerome Catholic Church in Ft. Lauderdale, FL. He also cleaned classrooms and ushered at the church, never missing a day of work in the 26 years he worked there.

In reflecting on Joey, Joan recalls how lovable he was. He was an avid Star Trek watcher and collector and also loved collectible model cars. She states, “Joey never met a stranger. Everyone was his friend. If he couldn’t remember your name, he would say. ‘Hi, old friend!’  He was an example to students at St. Jerome Elementary School where he worked, being accepting and friendly to everyone. The students responded to that.”

Jim Colburn was a product of the era he was born in. He was one of the soldiers that fought on the second day of the Invasion of  Normandy, France during World War II and fought at the Battle of the Bulge. He often visited the graves of his fellow soldiers in Europe to pay tribute to them, while also recognizing veterans in this country by placing flags on their graves during the holidays. This included putting flags on the graves of veterans buried in Annapolis at his home church, St. Mary’s Catholic Church.

People meeting Jim for the first time might see his gruff personality, but according to many, he was tender when it came to Joey and those in need. There was a lot of love between them and it was not unusual to see the two of them hugging.

Joan adds, “We would be walking along the Bayside Miami dock through a very derelict area on our way to church and there often would be a homeless person covered by a corrugated paper box. Jim, who always carried cash, would reach under the box and give the person money. When he gave to others, it was a gift. He never expected to be paid back.”

Jim was a man who also gave freely of his time and treasure to his parish, to the Christian Children’s Fund of Richmond, Operation Smile, and to the Benedictine School, because of what it provided to him and his son. He lived his life as a frugal man in order to create a special needs trust for Joey, which would take care of Joey until his death. Joan recalls, “He never had anything new, except his first boat. Everything he bought was used so he could save money for Joey’s care.”

As Jim’s own health began to deteriorate, he began planning for Joey’s continued care. Jim designated Joan to be Joey’s permanent caregiver once he was gone.  Joan states, “Jim had a tremendous sense of responsibility. He had cared for his own mother and had taken care of his niece. He was a man of his word, making sure Joey had everything he needed and someone to look after him when he was gone.”

Jim’s wishes were for Joey to continue to work and live in his home and in his community. According to Joan, after Jim passed away in 2013, Joey decided he didn’t want to go to work anymore. At age 50, he began having his own health issues, eventually ending up in a wheelchair because he was unable to walk any longer. Joan cared for Joey during this time with the help of retired EMS professionals in their town.

After Joey died at the age of 60 on March 4, 2017, Benedictine Foundation became the recipient of a $3
million bequest from Jim Colburn, the largest single gift in the history of Benedictine.

According to Barry Smale, Director of the Benedictine Foundation, “This bequest is significant because Jim Colburn recognized the need at Benedictine today to care for children who are much more severely disabled than his son Joey and require a higher level of assistance. Bequests of this type enable Benedictine to continue to meet the needs of its changing population. We are grateful for his foresight to plan for this gift and to make us its recipient.”

For more information about donating to the Benedictine Foundation, contact Barry Smale at (410) 634-2292.

To read more stories like Joey’s in our Inspired Giving magazine receive our next digital or print issue by emailing barry.smale@benschool.org.